August 2019—The Feteh Team in Addis Ababa has been working for six months with the Attorney General’s Office, the Supreme Court and Civil Society organizations to advance justice reforms and build public trust in the judiciary. 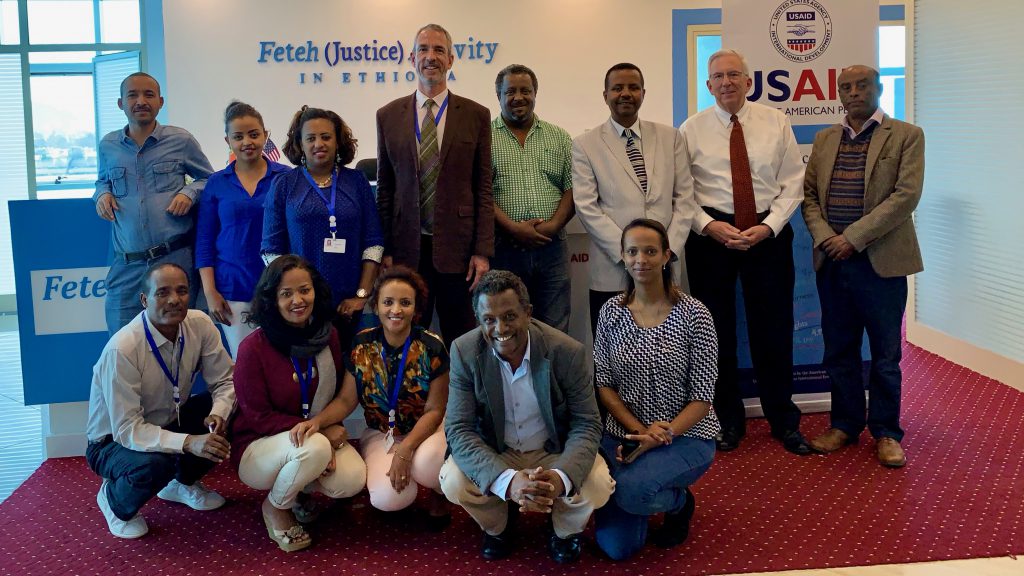 February 2019—Millennium DPI Partners, on February 13, was awarded a task order from USAID in Ethiopia to provide rapid and targeted assistance to the Ethiopian government of Prime Minister Abiy Ahmed as he carries out a far-reaching rights-based democratic reform agenda. The Feteh (“Justice”) Activity is a two-year, $4 million project focused on strengthening the rule of law to ensure that all Ethiopians have equal access to justice.

September 2017—Besnike Miftari and her team are busy reviewing and analyzing the piles of court cases that have landed on their desks. It’s a task that comes with a reward.

With the support of USAID’s Justice System Strengthening Program, 16 recent law school graduates were given the opportunity to work alongside judges as legal clerks in Kosovo’s courts to help conduct research, draft decisions, and move cases through the system. In turn, judges serve as mentors for the next wave of judicial employees, while receiving critical assistance from these young professionals in closing years-old cases.

“For now, this is the best thing that I can do,” said Miftari of the two-year clerking program. “The judges consider us as equal.” She noted that her work provides the ideal training ground to obtain a long-term court position. “When you close an old case, there’s a sense of willpower when you know that you contributed to the closing of cases that are more than 10 years old,” she added.

Already, five clerks who participated in the program are joining Kosovo’s courts in different capacities, thanks to the training they received through USAID in case management, backlog reduction, and legal drafting as well as the opportunity to apply their knowledge in real life.

One of these young professionals is Festa Zherka. After participating in the program at the Basic Court in Gjakova, she was recently promoted to train up to 250 court and prosecutorial staff on how to use an automated case management system that is being rolled out in Kosovo’s courts.

“We worked closely with the judges and we were also able to participate in court hearings,” she said. “I saw the real situation.”

Finding talented young professionals like Miftari and Zherka is vital for the future of Kosovo’s judiciary. In the next few years, 30 percent of Kosovo’s judges are expected to leave the courts through retirement.

Gazmend Bytyqi, who clerked at the Basic Court in Ferizaj and is on the path to becoming a judge, says the skills he developed in the program helped him get where he is today. “Now I feel comfortable to handle any [civil] case,” he said. “I have gained the trust and confidence from the court.”

Millennium DPI was awarded the Open Justice Project in Moldova in May 2017. Under this USAID Rule of Law program, Millennium DPI is working with counterparts in the Ministry of Justice and the Superior Council of Magistracy to foster a more accountable and efficient justice system accessible to all members of society. This process will include automation and web based technology tools to reduce corruption and build transparency in the justice system.

Millennium DPI was awarded the Justice System Strengthening Program (JSSP) in Kosovo in November 2015. Under this USAID Rule of Law program, Millennium DPI is working to strengthen the efficiency and effectiveness of the administration of justice, enhance the accountability and professionalism of justice system institutions and actors, and support the functioning and integration of judicial structures in the North.

Millennium DPI was awarded the Justice Project in Bosnia and Herzegovina in September, 2014. The $9.4 million USAID funded project is being implemented by Millennium DPI and its partners National Center for State Courts and Lucid Linx, a company based in Sarajevo, Bosnia.

Millennium DPI was awarded a Task order Civil Society Initiatives to Promote the Rule of Law in Sri Lanka under USAID’s Rule of Law IQC to work with Civil Society Organizations and the Ministry of Justice to enact justice sector reforms and expand access to justice for marginalized and vulnerable  populations.